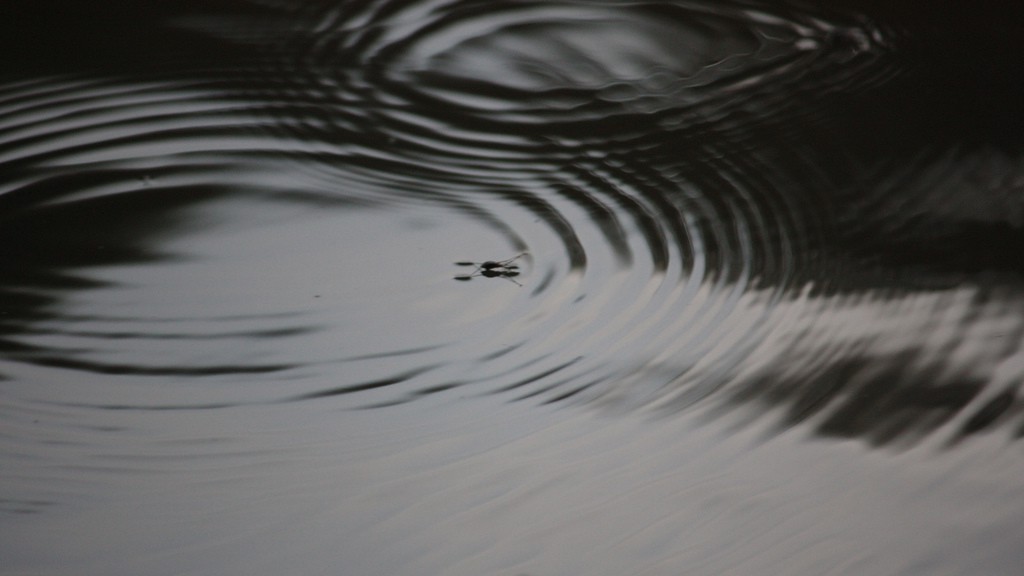 Over millions of years, nature managed to evolve a creature with such a delicate presence that it can stand on the surface of water without breaking the surface tension — the water strider. When they move though, water striders create a series of ripples that emanate out from each foot. The ripples are often large enough to scare away whatever prey they’d had their eye on, and to attract the attention of predators. Water striders spend a lot of time standing still. Probably thinking through the cost-benefit analysis of moving.

Nature also managed to evolve the human being — a creature so lacking in predators that it believes the ripples it creates in the world around it are of no consequence. Humans don’t often think about the direction of their ripples, how far they will travel or the effect they may have. Humans spend very little time standing still and thinking.

Humans are good at thinking about cause and effect on small scales — both spatial and temporal. It’s easy to imagine the problems I would cause if I set fire to my house — my wife and kids would be pretty angry with me for a start. It’s harder to imagine my house and the entire world burning down due to leaving the TV on standby mode.

Humans have a part of the brain that appears to be dedicated to pattern recognition. All day long it’s sat there looking for patterns in the world around it and trying to attribute meaning to them. Often this meaning is scraped together from past experience — this is how some human brains came up with the idea that by performing a ritual in the evening as the sun went down, they could ensure that it would come up again in the morning. This is how humans invented organised religion.

Because so much of our understanding of cause and effect is based on past experience, it’s difficult to predict the effects of our actions when we’re doing something new. Everything on the internet is new. If each generation is doomed to repeat the mistakes of the previous generation, then a generation on the internet seems to be roughly two years.

As we outsource more and more of our brains to computers, we’re radically changing the way that we learn and think. The modern human’s memory really only has to remember a few things, like where its keys are, and to put clothes on in the morning. When I learned computer programming, it was from a stack of books; each updated edition meant the old one could rest in peace in the code book graveyard — a stack used to raise the height of my monitor. Now however, a programming job interview should consist of one question — “Do you know how to Google?”

The speed of thought is now restricted by the bandwidth of our typing. Or if it’s something particularly useless that we want to know, it’s down to how quickly we can ask Siri. Siri doesn’t think about cause and effect though without having been told to by someone who has already thought through the cause and effect. Siri has been taught the meaning of the word “suicide”, and what an appropriate response should be. Describe your feelings to it though, and it’ll likely just tell you who won a football match.

We’re slowly being conditioned to think only of how to get the answer as fast as possible. The journey is less important, the side effects even less so.

It was either Voltaire or someone in Spider-Man who said “With great power comes great responsibility” and, with the doomsday clock currently at two and a half minutes to midnight, every single one of us is walking around with great power in our pocket. This power gets greater on an exponential scale too. Moore’s Law, most simply stated, predicts that our computers double in power every two years. This has historically been pretty accurate and while it appears to have slowed recently, we’re also on the verge of the next great leaps that will likely accelerate it beyond its predicted curve — artificial intelligence and quantum computing. Even without the acceleration, Moore’s law suggests that your average computer will have the power of every human brain on the planet by around 2050.

At some point between now and then, we’ll reach the singularity. This is most easily grasped as being a time in the future where current humans can’t even imagine what lies beyond. While this might sound a little scary, it’s worth pointing out that humans have already been through many singularities.

If you were to go back in time and demonstrate asking Siri to set a reminder for you to a couple of 19th century farmers, they would be entirely unable to comprehend the majesty of your glass rectangle replying with the current weather conditions. You’d be a god. If you then came back to the present you’d find a whole new religion, the Sirists, wearing tiny glass rectangles on chains around their necks.

According to Ray Kurzweil, co-founder of the Singularity University, our current impending singularity is coming in the next 20 years or so. And because of the way that exponential graphs work, the next one after that probably in the 20 years following. The next one probably inside 10 years. I can’t imagine what happens to humans after the first singularity, let alone when we reach a point where there’s several per day. Absolute power corrupts absolutely.

Digital advancements have given us all this power, but digital as an industry seems extremely slow to understand it. Irresponsibly so. A few years ago Facebook ran a secret trial to test whether they could manipulate the mood of 689,000 unsuspecting users by altering the content of their news feeds. As far as I know nobody died or went postal, but Facebook couldn’t have known in advance that this would not happen.

Only the digital age could have brought forth a slogan like “Move fast and break things” and proudly put it up on the wall. If Facebook meant this in the spirit of punk it can only be because they weren’t around for punk. Even punk, when viewed on an £800 smartphone, looks like a cool brand aesthetic. I can’t imagine dangerous experiments with people’s mood would have happened if their walls were decorated with “Just because we can, doesn’t mean we should”.

Everyone working in tech of any kind needs to learn to think in a new scale. Everything we do now happens in those spatial and temporal scales that are outside the bounds that our brains have constructed over millions of years. A 140 character tweet is readable for years into the future from anywhere on the planet, and some places off it. Modern humans can create ripples that spread across the world and far into the future in ways that previous generations could never imagine and modern humans fail to imagine. Current us is future us’s predator.

This article was originally published in the Silicon Beach book — a beautiful bound souvenir for attendees of the conference containing articles by all the speakers. If you’ve never been to Silicon Beach, I highly recommend keeping an eye out for the next one.