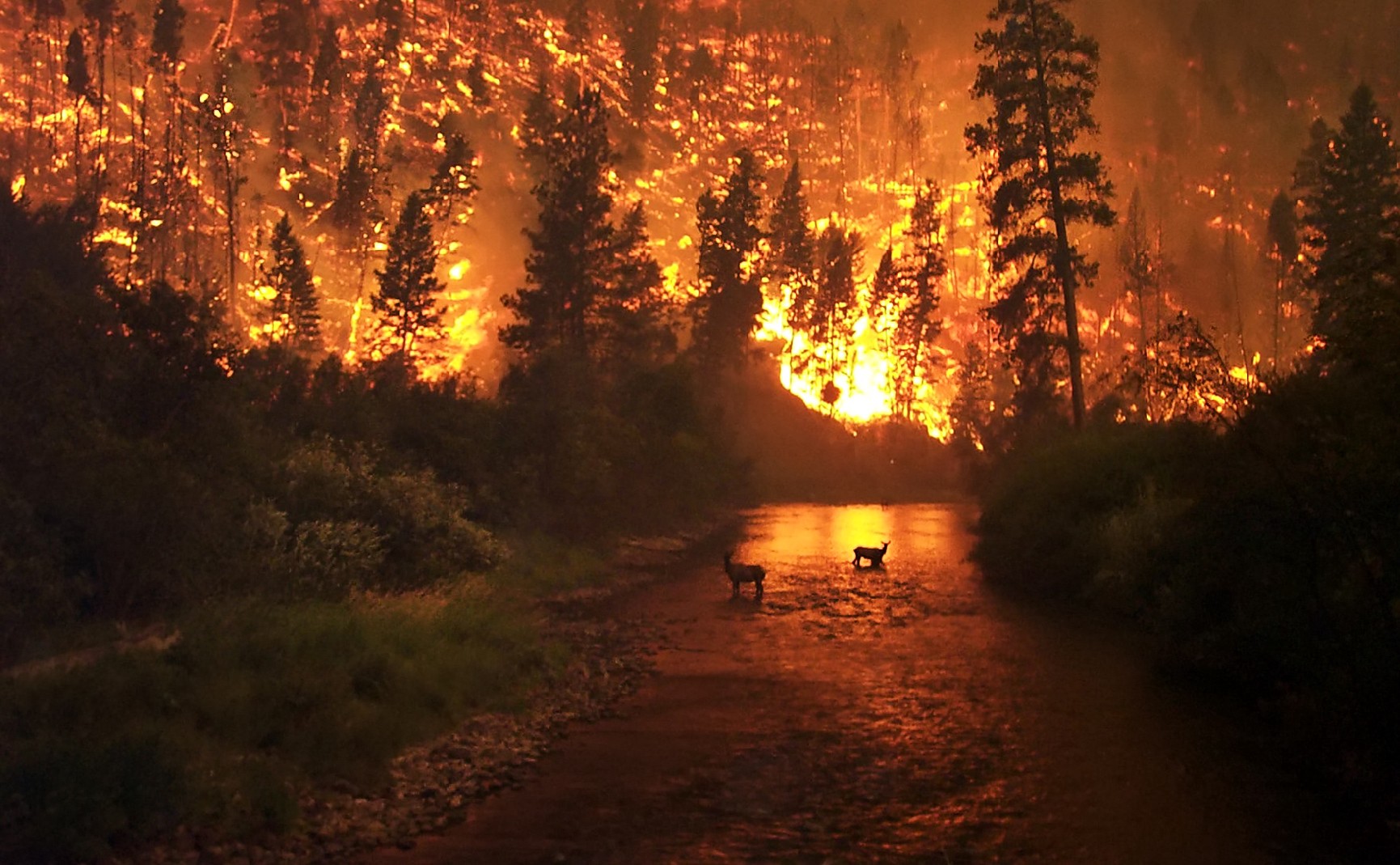 Given that in a previous post on Medium I called for TV manufacturers to give us dumb panels to which we can connect any number of little black boxes for our “smart” features, I’m building up quite a collection of these little boxes while stubbornly refusing to upgrade a television that I hate to something with features I don’t want.

This week I added an Amazon Fire TV to my collection. I had one requirement for this little box, and that was that the quality of Amazon Prime Instant Video would be better than it had been through my XBox, where HD looked nothing of the sort. And to Amazon’s credit, it looks fantastic when streaming out of the Fire TV and the instant start feature works beautifully. Unfortunately this is where the good stuff ends. The rest of the Fire TV is a mess. Throughout this review, I’m holding the Fire TV up against a gen2 AppleTV and a Roku that I also own.

The biggest problem I have with it, is the remote. It’s a nice looking thing, with a good weight and is very comfortable to hold. However, out of every 10 presses of any button on the remote, 3 to 5 of those will register twice (or sometimes more). This can range from mildly annoying: hitting the back button takes you back up two or more levels levels instead of one; through to truly infuriating: typing in a password using the on screen keyboard becomes Sisyphean task. It took me a full 15 minutes to log in to Netflix using the on screen keyboard.

If Amazon provided an iPhone app like Apple’s Remote app, or Roku’s own version this would have been a hell of a lot easier. But they don’t. All input must be done with the misfiring Fire TV remote.

Once I’d managed to log in to the Netflix app, I decided to try it out for quality against directly against my Apple TV’s Netflix, both plugged in to the same screen via a Yamaha receiver. This test didn’t last very long. Despite my ageing Apple TV only being able to output 720p, the quality was noticeably better – contrast and colour both visibly a cut above – and the Fire TV had noticeable compression artifacts. There were two things that let the Fire TV’s Netflix app down even further though, the audio was out of sync and the subtitles used one of the worst fonts I’ve ever seen. Netflix on the Fire TV was essentially unusable.

The only other app that had any draw for me was the Spotify app, used prominently in Amazon’s advertising for the Fire TV. My current Spotify listening is done by playing on my iPhone with AirPlay output to the Yamaha receiver. I figured it would be nice for my daughter to be able to use Spotify without having to use my phone so I installed it. It turned out not to be a Spotify app, but a “Spotify Connect” app which requires you to be running Spotify on your phone. It’s basically AirPlay but convoluted.

There are other apps available for the Fire TV, but a significant percentage of these are dreadful Android fishtanks and fireplaces. Almost nothing compelling at all. If you’re thinking of getting one for the apps, don’t. Get a Roku.

Amazon’s claimed killer feature for the Fire TV is the dedicated mic search button on the remote. I’ve seen reviews complain that this functionality only searches Amazon videos and doesn’t search the content of the installed apps. Given that the third party apps are unusable, I consider this a blessing.

Spoken searches are actually very good. I tested this functionality during a throat infection that left me sounding like Jason Statham on his deathbed. The Fire TV still had no trouble understanding me, and was a lot more accurate than Siri is with me on a good day. However, (there’s a lot of howevers in this review) this box is designed to push more to you than just allowing you to watch the movies available to you via Amazon Prime Instant Video. Consequently any search you do will return results from outside of the Instant Video catalogue, often with an option to buy. Bafflingly though, it also returns movies that there is no way of watching at all, either through Prime, buying or renting. It does let you add them to your watchlist though, so my watchlist is now full of movies taunting me about how I can never watch them. I feel “watchlist” is something of a misnomer here.

Amazon is no stranger to Dark Patterns — user interfaces designed to trick people. The Amazon iOS app has a nasty habit of defaulting to paid delivery even when every item in your basket is Prime eligible and therefore free next day. 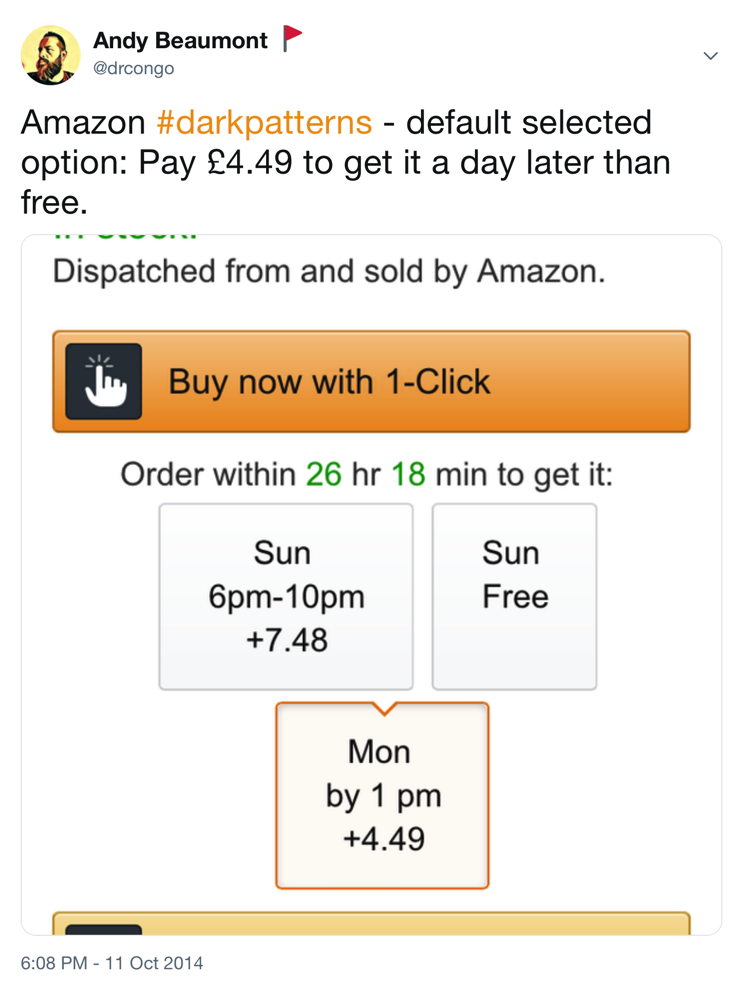 The Fire TV continues in this fine tradition. Go in to a TV series via the “Recently Added to Prime Instant Video” menu, you know that bit where stuff is free to watch with your Prime subscription? Go up to the latest season of that series, and all of a sudden the button that used to say “Watch Now with Prime” says “Buy HD £2.49”. The same button, the same position, but now you’re paying. It’s a dirty trick and I have no doubt that it’s deliberate.

The Fire TV is riddled with bugs. You can feel the Java oozing out of the Android that is seeping out of every sore on the Fire TV. Here’s a quick list, based on minimal usage…

Every now and then the Fire TV loses network connectivity. When it does, it shows a dialogue box with the words “Connected with problems”. It doesn’t tell you what the problems are, nor offer any way to fix them. Every other device on the network remains fully connected to the network and my Fire TV is sitting about one metre away from the access point. The only way I have found to get back on the network when this happens, is to tell it to forget the WiFi network and then reconnect to it. Which of course then means pushing the on screen keyboard back up that hill to re-enter your password.

If you upload photos and videos from your phone to Amazon Cloud Drive you can then view them on your TV. Which should be really cool. However, after watching any one of your videos you’re taken back to the list screen with no visible selection, and none of the buttons on the remote work apart from the back button and the home button. This means if you want to watch the last two videos in a huge horizontally scrolling list, after watching the first video you have to hit back, then scroll through all your videos again to find the next one you want to play. This managed to take all the fun out of being able to watch videos of my kids on the TV. Again, I’m back to AirPlay which just works.

I have yet to work our under what conditions the Amazon Fire TV will automatically go to sleep after a set period of time. I have however found several conditions in which it won’t.

The screensaver will happily show a slideshow of photos from your Amazon Cloud Drive. However, it’s possibly the dumbest implementation of a photo slideshow I have seen in many years. There is no intelligence about where it crops and zooms the photos, so expect to see many photos of your kids with their heads missing. But worse than this, it can’t seem to tell the difference between a photo and a video. So every now and then you get the first frame of the videos you have uploaded appearing in the slideshow, no matter what that first frame is. Until I saw this screen saver, I’d never really given much thought about the first frame of my videos, now I realise that they are almost universally some combination of dull, out of focus, not of the subject of the video, poorly lit, poorly framed, or pointing at the floor. Sometimes all of the above. This immediately renders the slideshow useless lest you become a laughing stock with your family for the poor quality of your photos and the fact that you actually decided to display those.

Don’t buy one. The only thing it is good at is delivering Prime Instant Video in decent quality. On every possible other level it is outperformed by both the Apple TV and the Roku.